skip to main | skip to sidebar

The last bit in Hanoi, and on to Korea, homeward bound again!

Written from home a week and more after The End
That last afternoon in Hanoi was like so many others I've lived through, but better too.  I walked around, stretching legs, working off excess energy, looked in a lot of shops I didn't need anything from and restaurants I was too full to eat in, drank coffee, took a nap, finished packing.  There's something about leaving at midnight that makes the day go on and on.  The dentists spent a half hour fussing over my new front teeth late in the afternoon, the book's editor phoned then came by on her scooter (what could be more appropriate for a delicate young lady than a scooter called "Atilla"??) and then the dentists and the Architect (three sisters from the Hotel family) took me by the collar down the street and around the corner to my favorite supper. . .won ton soup (er. . .something like "Mi Hoanh Thanh" with appropriate diacritical marks).  It was funny, the cook-waitress knew all of us, but separately, so we made a surprising table for her but she never blinked.  Her hair reaches well below her bottom on the rare occasions it's let out of her bun at the shop. . .I told her once how lovely it was, and she blushed, but hair or not, she serves a wonderful bowl of noodles with any number of surprises. . .a crisp fried won ton on top, a few soft steamed won tons, slices of pork and liver (yuck. . .) a shrimp, and of course, a wad of "mi" noodles. . .small and slightly tough, with a sort of nutty flavor. . .all in a boiling hot broth, with lettuce, herbs and spices on the side.  Wonderful.  Then finally there were the farewells at curbside, hugs all around (I went eleven years in Viet Nam without a hug ever, now they're a matter of course. . .even the editor for goodness sake).  The long ride out to the airport was unusually good.  The taxi was well driven, without the murderous (suicidal?) dashing through the crowds of motorbikes and buses and dump trucks on the freeway.  The new bridge across the river was all lit up. . .I'd seen that once before and tried the new little camera on the best of it.  Bridges here are a celebration of success, progress and a better life.  Lights in the evening are entirely appropriate! 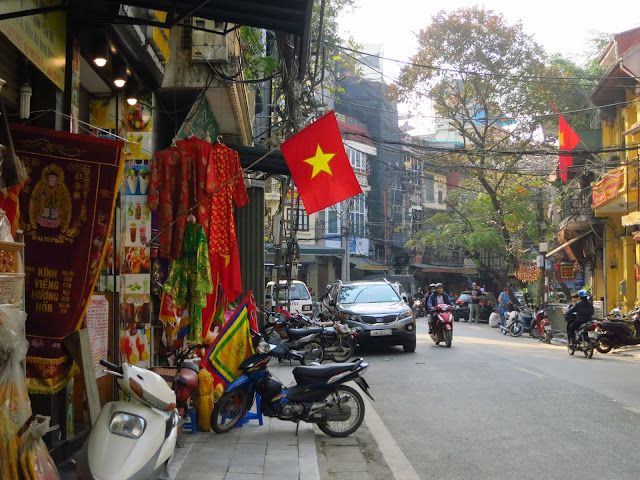 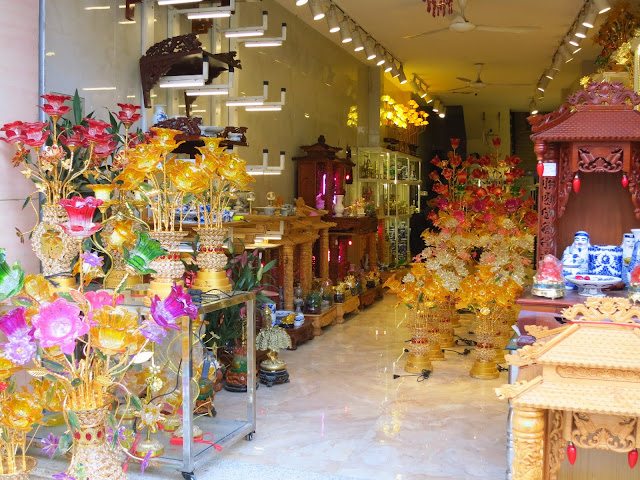 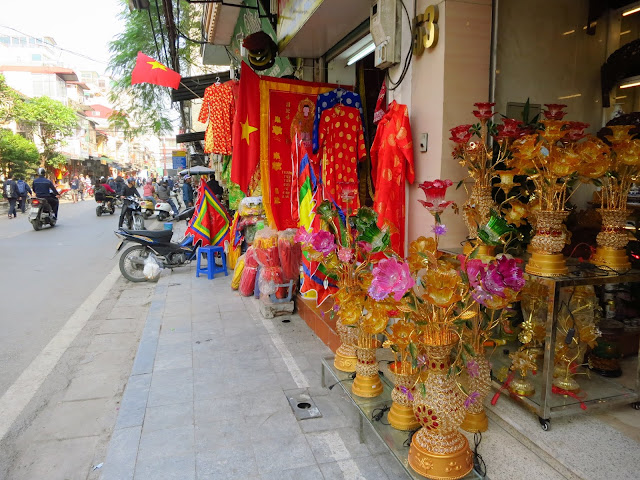 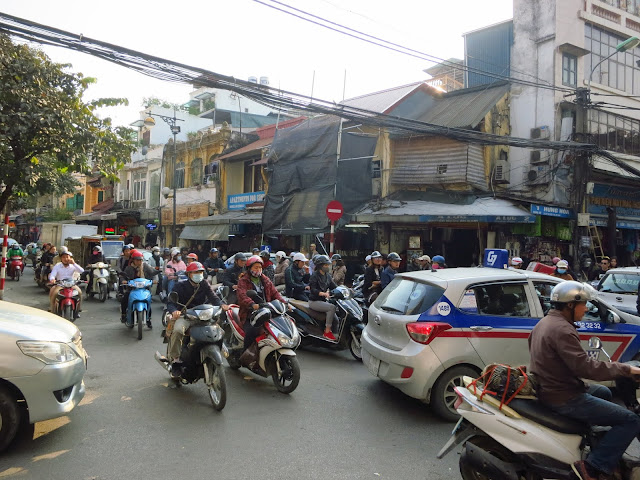 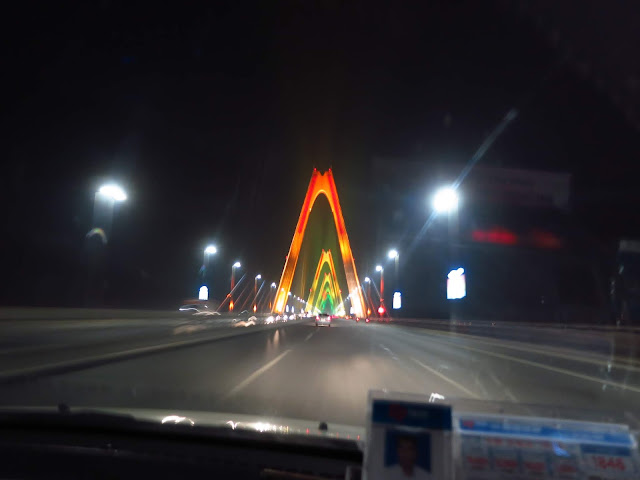 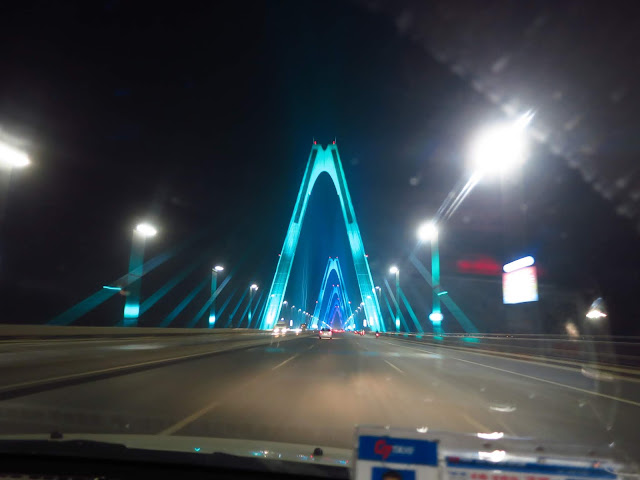 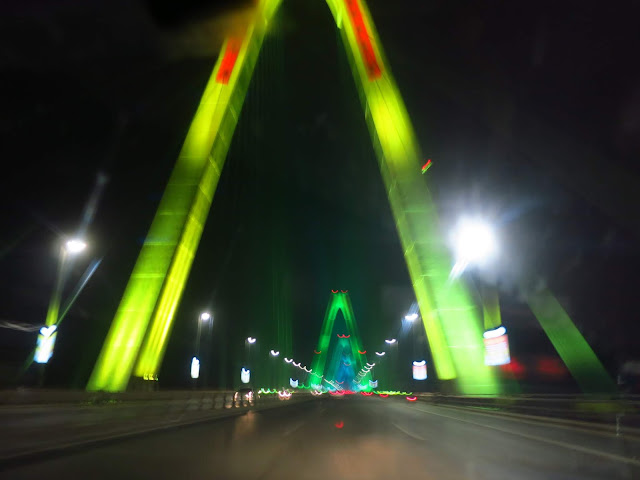 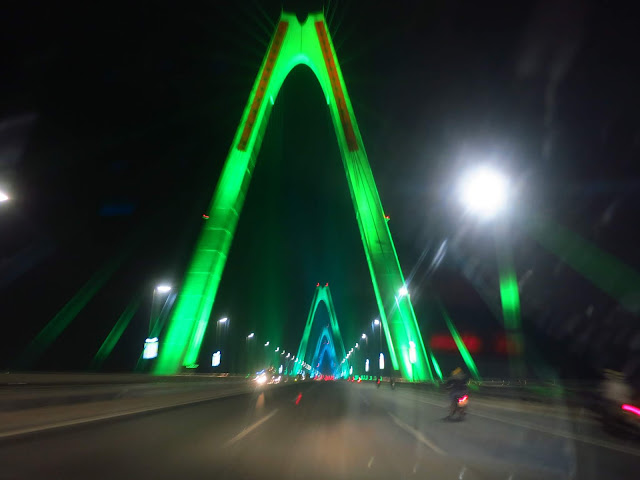 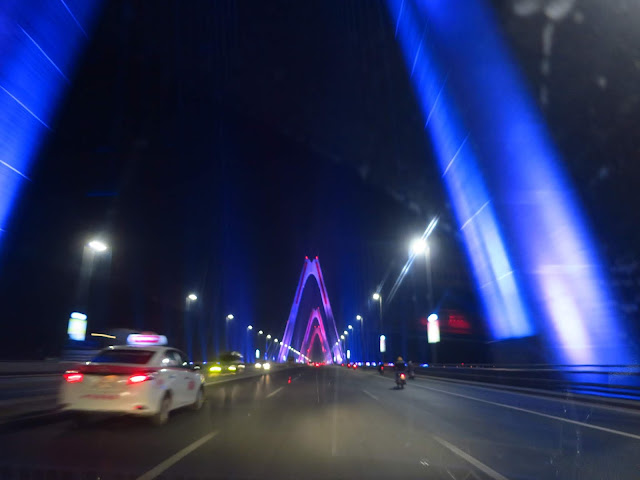 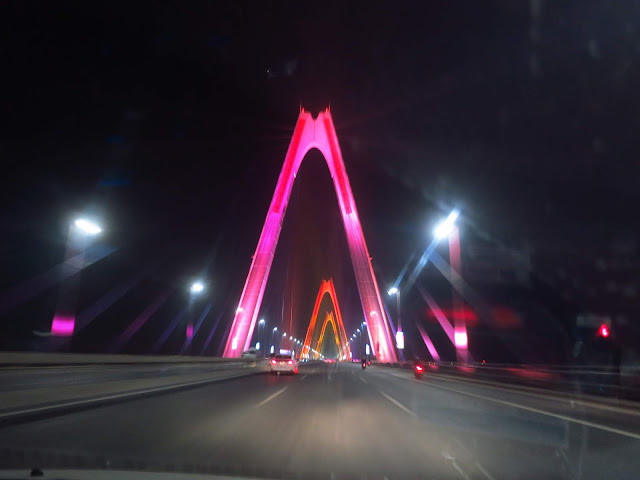 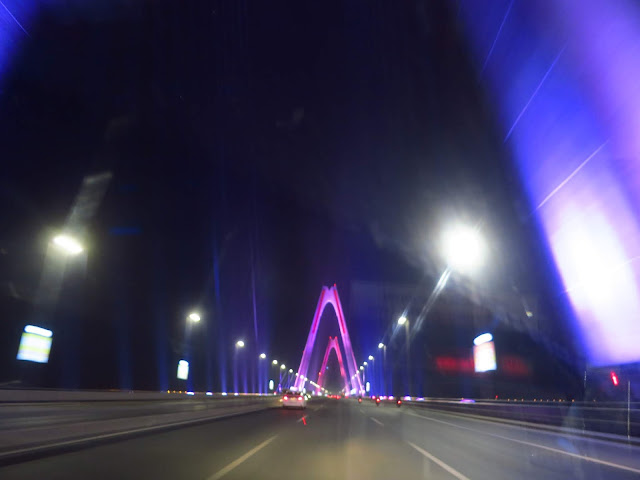 And so through the new terminal, still far too large for its work, but the work is growing into the facility quickly.  When I first flew in here to Hanoi in 2005, to the old terminal, there were only a couple of arrival gates, perhaps four or five airplanes (and small ones at that) standing on the tarmac, and hard, nasty seats to sit in and nothing to do while you waited in the departure lounge.  This still isn't Seoul or Taipei, by any means, but at the rate they're going. . .not long, not long at all!

Then Korea, early in the morning, to a warm and familiar hotel a few minutes from the airport, a desperately needed sleep, and up for lunch.

Lunch, in a funny neighborhood consisting entirely of hotels for transiting airline passengers, a number of purely Korean restaurants, and a surrounding area of offices and shops and one (apparent) megachurch.  The neighborhood is wildly colorful in a cold-drab-winter sort of way (Seoul, or rather Incheon, is deep in winter now, though there's no snow on the ground this trip).  Every street level wall is covered in menus and advertisements. . .the menus graphically explicit and detailed (so many slices of pork, so many shrimp, the bowl of hot broth, the kim chi (several sorts) and a price. . .repeated with innumerable variations, all in Korean text and Korean Won).

On all these trips, in my defense, I've been accustomed to Viet Nam, where Visa cards still are only of any use in  scattered ATM's and tourist spots in the big cities.  Mostly, away from the tourist zones, if you don't have cold hard local cash you don't have anything.  The lady who makes your egg sandwich or your bowl of noodles or cup of coffee doesn't have a terminal, she has a box full of folding money, all mixed together, or a roll of bills tucked into her waist band.  I guess I'd assumed the same for Korean restaurants (in an international airline-hub?? duh!!) all these years, so when I found my Visa card was welcome anywhere in the neighborhood, I didn't fool around.  $12,000 Won?? (almost $11 USD) for rice, bul go gi and kim chi??  You bet!!  What a lovely spicy meal, and the walk to find it was great fun, though the frost kept nipping at my ears.

Thus back to the terminal, through the formalities and onto another plane. . .for only 9 hours this trip, with our ground speed often up almost to 700 mph.  We had a ferocious tail wind I think, the same distance took 12 hours on the way out.  I guess we got those hours back going home.